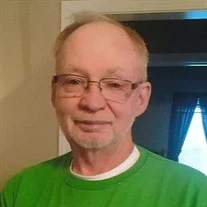 
William T. (Bill) Futrell, 67 of Mayfield, was called home to be with the Lord on
Wednesday, May 15, 20L9, surrounded by his loving family after a courageous
battle with Glioblastoma Multiforme.
Bill was born on November 20,7951, in Mayfield, KY. He graduated from Mayfield
High School in 1969 and attended Murray State University, where he majored in
Business.
Bill served in the U.S. Army Reserves as a Drill Sargent in Fort Polk, Louisiana, preparing young men for
the rigors of combat in Vietnam. When he returned home, he was employed at General Tire in Mayfield
and worked there for 32 years until the factory closed.
Bill had an outgoing personality, never met a stranger and made friends easily. His kind and loving heart
was shown in his interactions with his family, friends and his community. Bill was always able to see the
humor in almost any situation, had a ready smile an infectious laugh. lf you needed help or support, Bill
was always there for you.
Bill was married for 47 years to the love of his life, Evelyne (Grisham) Futrell.
Bill is survived by his loving wife Evelyne (Grisham) Futrell, his son William M. (Matt) Futrell (Stephanie
Mitcham), his daughter Amy (Jerry) Norman and his daughter Shelley (Michael Campbell) Futrell. He is
also survived by his cherished grandchildren Colin, Liam, Alaina and Logan, his brotherJim (Myra)
Futrell, brother-in-law Charles Grisham, nieces and nephews and host of long-time friends.
Bill is preceded in death by his parents Doris (Schedler) and James Futrell.
Visitation will be on Friday, May 17,5:00 PM at Brown Funeral Home in Mayfield, KY. Funeral services
will be on Saturday, May 18 at 11:00 AM at Brown Funeral Home with the Rev. Paul Donner, of St. Paul
Lutheran Church, presiding. Graveside services will immediately follow at Mayfield Memory Gardens.
Serving as pallbearers will be Dennis Moss, Garland Moseley, Jesse Perry, Jarrod Thompson, Kenneth
Cherry, Andrew Futrell, Jon Futrell and Mike Turner.
The family asks that, in lieu of flowers, you please donate in Bill's name to: Brain Cancer Awareness at
8550 West Bryn Mawr Ave., Suite 550, Chicago, lL 60631; St. Jude Children's Hospital, 501 St. Jude Place,
Memphis, TN 38105; the St. Vincent De Paul Society, 61.5 West Broadway, Mayfield, KY or a charity of
your choice.
+ Eternal rest grant unto him, O Lord; and let perpetual light shine upon him. May his soul and the souls
of all the faithful departed, through the mercy of God, rest in peace. Amen. +