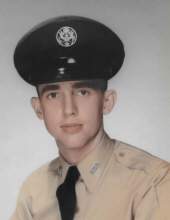 Richard was born in Fulton, Tennessee on October 8, 1933 to the late Ernest Austin Page and Mavis Milton McWhorter Page.
He grew up working in the family business, Page’s Garage, where he gained his passion for understanding how things work. This would guide his career, personal interests, and hobbies for the rest of his life.

After graduating from Paducah Tilghman High School, Richard volunteered for the United States Air Force during the Korean War. He was trained and served as an Aircraft Engine Mechanic and supported ground power systems. During his service as Staff Sergeant at the U.S. Air Force base in Thule, Greenland, he received an Outstanding Service Accommodation from the Base Commander for his role in supporting 24/7 missions.

After completing his active service, he joined the Tennessee Valley Authority while continuing to serve in the Reserves. He worked in power plants for the remainder of his career, and retired as the Assistant Plant Manager at Kentucky Dam.

He was an avid fisherman and hunter, and passed his love of the outdoors to his children and grandchildren. He was a car and airplane enthusiast, a voracious reader, and a World War II history buff. He enjoyed planning and executing challenging projects. He was a fan of college athletics, particularly the University of Kentucky Wildcats. Whether in his hometown of Paducah or traveling internationally, Richard never met a stranger, engaging everyone he met with genuine interest and sharing his point of view.

He was preceded in death by his parents.

Contributions may be made in his memory to: Broadway United Methodist Church, 701 Broadway, Paducah, KY, 42001.