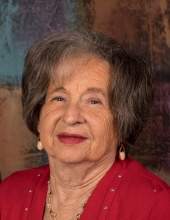 Mary Louise Crooks Lane was born April 1, 1942, the daughter of the late Ralph Crooks and Ondine Richards Crooks in Graves County, KY. She graduated from Symsonia High School in 1960. At the young age of 17, she married Kenneth Ray Lane during a March blizzard. After several moves, due to Kenneth’s Army assignments, they settled in Charlotte, NC where they raised their family. Mary retired from First Union National Bank in 2001.

After retirement, they relocated back to Paducah to be near their families. Mary was a founding member of Westside Church of Christ in Charlotte, NC (now Mountain Island Church of Christ) and Broadway Church of Christ in Paducah, KY she enjoyed many outings with the Senior Seekers Ministry. She was an avid lover of flowers and gardening, and was also a talented seamstress.

Preceding in death were her parents and son-in-law William “Billy” Potter.

Expression of sympathy may be made to American Cancer Society, 952 Fairview Drive, Suite 4, Bowling Green, KY 42101.