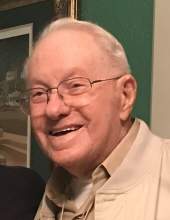 John Watters, 89, of Lovelaceville, passed away on August 14, 2019 at The Georgian Lakeside in Roswell, GA.

John was a member of Lovelaceville Baptist Church and Woodmen of the World. He was a retired inspector for McDonnell Douglas and Boeing in St. Louis before moving back to Lovelaceville, which he always considered his home. John’s joy in life was tending to his garden, where he grew vegetables to give to friends and family.

Funeral services for John will be held at 1:00 pm on Wednesday, August 21, 2019 at the Lone Oak Chapel of Milner & Orr Funeral Home with Rev. Jeff Wallace officiating. Burial will follow at Woodlawn Memorial Gardens.