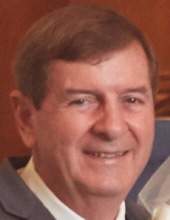 Mr. Carter was born in Big Springs, Texas on December 9, 1946 to the late Clay and Thelma Carter. He was a graduate of Symsonia High School and Murray State University, where he majored in Engineering Physics, and was a veteran of the United States Army. After serving, Jesse moved back home to become the third-generation family owner/operator of Carter Concrete Products.

Jesse was very family oriented in his time away from his business and was an active, involved and devoted father. He also had a love for all animals. He will be remembered as a generous, kind, and gentle soul.

Jesse is survived by his wife, Linda Heathcott Carter; his stepmother, Fran Carter of Paducah; his daughter, Tracy Gowen and husband, Greg Gowen, and son, Carter Gowen, all of Oxford, MS; and his son, Bruce Carter and wife, Kristen Carter, of Paducah;

He was preceded in death by his parents and one brother, Curtis Carter.

A private family service will be held at a later date.

You may leave a message for the family or light a candle at milnerandorr.com.