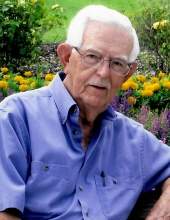 Born in Desloge, Missouri in 1930, Bud graduated from Desloge High School in 1948 and immediately began to serve his country in the U.S. Army during the Korean War, based in Germany. During those years, he was a highly successful basketball coach of several Army teams, winning a European championship and at one time achieving a record of 64-0.

After returning from Germany, he enrolled at Murray State University where he enjoyed sports and performed in the annual musical Campus Lights. He earned his Bachelor of Science degree in 1957 and Master's Degree in 1960 from MSU.

He took great pride in the successes of the many students he helped and mentored over the years.

Along with his love of sports, Bud was a tremendous supporter of his school's band and choral programs, announcing halftime shows and organizing jazz festivals. One of his favorite things to do in the Paducah area was to attend performances of The Cruisers and the Paducah Jazz Ensemble, groups with whom his son, Jim, has played.

An avid golfer, Bud had the distinction of achieving four holes-in-one. He was a proud parent and the biggest fan of his children, grandchildren and great-grandchildren's sports and activities.
He is survived by his wife of 66 years, Reba F. Allen Long; his daughter, Ann Beckett (Steve) of Sharpe, Kentucky; his son, Dr. James H. Long, Jr. (Debbie) of Paducah; grandchildren, Whitney Stephens (John), Cory Long, Paige Beckett, Sydney Beckett and Carson Beckett; his great grandchildren, John Stephens and Max Stephens.

Mr. Long was preceded in death by his parents, Harold McCallion Long and Marietta Crystal Ste. Gemme Long; his sisters, Doris OsBurn and Kay Gremminger; and his brother, Donald Long.

Graveside services will follow the visitation, Monday, May 9, 2022 at Woodlawn Memorial Gardens with Paul Wingfield officiating.

You may show your support at www.milnerandorr.com and send a “Hug from Home” balloon message.

To send flowers to the family of James, please visit our floral store.