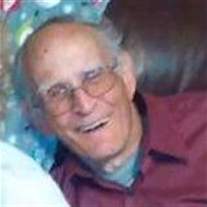 Mr. Harrell Young Black, age 82 of Mayfield, Passed away at 4:30 A.M. Saturday at his residence. He was retired from the former General Tire Plant in Mayfield, a U.S. Army Veteran and attended The First Assembly of God Church. He is survived by his wife; Betty Brashears Black, one son;
Dennis Ray Black, Mayfield, one daughter; Sherry Dawn Black, Nashville, TN., one sister: Sandra Evyonne Griffith McKenzie, TN., one half sister, Christine Argo, McKenzie, TN. He was preceded in death by his parents; Johnny and Robbie Fletcher Black and a half sister; Nellie Brinkley. Funeral services will be conducted at 3:00 P.M. Monday at the Brown Funeral Home in Mayfield with Rev. Mickey Fowler officiating. Serving as pallbearers will be; Joe Langston, Michael Langston, Jerry Jones, Ricky Jones, Keith Dowdy, Willie West and Dennis Reesor. Interment will follow in the Mayfield Memory Gardens. Friends may call from 12 Noon until the funeral hour on Monday at the Brown Funeral Home in Mayfield.