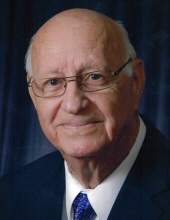 On February 15, 2020 Harold Lloyd “Buddy” Massey left this earth to join his beloved wife, Nancy L. (Coleman) Massey in heaven. Buddy was born on December 25th, 1933 in Somerset, Ky. to parents, Harold and Lucy Marie (Gregory) Massey. He was proud to be from Pulaski County and often talked about his school days and his many cousins, friends and classmates. Buddy was a member of Boy Scout Troop 79, Bluegrass Council, and achieved the rank of Eagle Scout in 1951. He loved scouting and being outdoors hunting arrowheads and exploring the woods and many creeks and waterways of Pulaski County. As a young adult, he remained involved as an Assistant Scout Master alongside his brother-in-law, Scout Master, Scott Gresham.
In 1953 Buddy enlisted in the United States Marine Corp. He was soon deployed to Korea and served as a radio operator with Marine Medium Helicopter Squadron 161. The dedication and bravery of HMR-161 proved that helicopters could survive in combat and carry out their mission of supporting the ground troops. He told many stories of his buddies and life as a Marine but was happy to finally come “home” to California where he stayed with his sister, Cloris Ann “Gan” Gresham, her husband, Scott, and their young daughter, Lucy Ann.
From there Buddy moved back to Kentucky and took up residence in Louisville with his best friend, Jack Criswell. He became employed with Western Electric Phone Company and thanks to Jack, met the love of his life, Nancy. They married in 1958 and lived in Palmyra and Floyds Knobs, Indiana where they began raising their two children, Rocky and Karen Ann. They were faithful members of the Palmyra Church of Christ and Charter Members of the Floyds Knobs Community Club.
In 1965 Buddy was transferred to Paducah, Kentucky and moved his young family to the place he would forever call home. The next year they welcomed a daughter, Rebecca Jean, and the family was complete. Buddy was a hard worker both at his job and at home. He and Nancy made friends quickly and were involved in many clubs and groups. Buddy was a member of the Hendron Lions Club, coached baseball teams, taught Sunday School at their home congregation, Lone Oak Church of Christ. He was a dedicated church member and made sure his family was there every time the doors were open. He and Nancy built lifelong friendships in the church and the community.
Buddy spent the last five years of his employment working in several different boroughs of New York. He and Nancy resided in East Patchogue, Long Island where their daughter, Rebecca, joined them. After 31 years of dedicated service he retired from AT&T and moved back to their home in Paducah. He was an Honorary Life Member of the Communication Workers of America and a member of the Telephone Pioneers of America.
Buddy was proud of his house and yard and worked tirelessly to keep them looking beautiful. He always had games to play in the back yard including jarts, horseshoes, tether ball, badminton, swimming and even built a swing set out of miscellaneous telephone company parts. He was an avid woodworker and honed his craft to perfection. He made a lot of furniture pieces for his family. He always supported his children in their interests including motorcycle racing, basketball, softball, high school band and even allowed his son, Rocky, to have his band practice in the garage. He loved fishing and hitting the lakes with his buddies, but most of all, he loved his family.
Buddy was preceded in death by his beloved wife Nancy Lou Coleman Massey, his parents: Harold and Lucy Marie (Greggory) Massey, sisters Cloris Ann “Gan” Gresham, and Joyce Marie Johnson. He is survived by his brother: Wayne G. Massey and wife Nancy of Middletown, Ohio, his children: Robert B. “Rocky” Massey and wife Lenor of Paducah, Kentucky, Karen A. Phillips and husband Rance of Brookport, Illinois, and Rebecca J. Massey of New Salisbury, Indiana, six grandchildren: Rachel A. Massey of Colorado Springs, Colorado, Justin C. Massey and Gail of Paducah, Kentucky, Tarah L. Gower and Ricky of Brookport, Illinois, Ashley M. McKendree of Brookport, Illinois, Kristen N. Guthrie and Steven of Depauw, Indiana, Laken M. Coughenour of New Salisbury, Indiana and twelve great-grandchildren.
Visitation will be held at Milner & Orr Funeral Home 120 Memorial Drive, Paducah, Kentucky, 42001 from 11:00 a.m. to 2:00 p.m. Wednesday, February 19, 2020 with funeral services immediately following. Chapel service will follow at Woodlawn Memorial Gardens where he will be entombed with military honors.