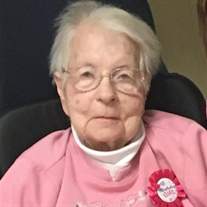 She was a member of the First Assembly of God Church in Mayfield, and she was retired from Mayfield Manufacturing.