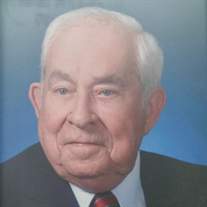 A.G. Wolfe, 95 years, of Mayfield, KY died on Dec. 25, 2016 at his residence in Mayfield. Mr. Wolfe was born and raised in Mayfield and graduated from Mayfield High School. He began working at Pratt & Whitney aircraft in Connecticut prior to WWII and left to serve in the Army Air Corps as an aviation mechanic working mostly on B29's. After his honorable discharge, he returned to Pratt & Whitney Aircraft for approximately 37 years. He was an avid golfer throughout his life. He is survived by his four daughters, Susan Seigars and husband Richard of Southington, CT, Judith Urso of Palm Harbor, FL, Nancy Barnard and husband Bob of Lawrenceville, GA and Patricia Wolfe of Ripley, TN. He also leaves one brother, Jeff Wolfe of Mayfield, five grandsons, Robert, Christopher, Jason, Matthew and Eric, and three great grandchildren, Victoria, Alyssa and Ryan plus an extended family. He was predeceased by his wife Blanche (Coullard), his parents Arthur and Beulah Travis Wolfe, sisters Ruth Estes, Beatrice Wolfe and Betty Bergmann, and brothers Gerald Wolfe, Raymond Wolfe, Bobby Wolfe and Billy "Red" Wolfe. Funeral services will be held on Saturday, Dec. 31, 2016 at 11 a.m. at Brown Funeral Home in Mayfield. Rev. Hugh Barksdale will officiate. Internment will follow at the Mayfield Memory Gardens. Visitation will be held from 5-8 p.m. at the funeral home on Friday, Dec. 30, 2016. In lieu of flowers, donations may be made to the First United Methodist Church in Mayfield.