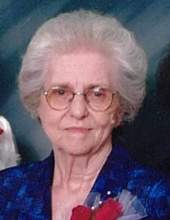 Mrs. Courtney was a member of Bellview Baptist Church. She was a a beloved wife, mother and homemaker.

She was preceded in death by her husband of 40 years, James Courtney; a daughter, Tammy Courtney; two sisters, Rudy Mitchell and Merle Flournoy; a brother, Billy Gibson. Her parents were Herbert and Cleda Fay Keeling Gibson.

Funeral services will be held at 1:00 p.m. on Tuesday, January 28, 2020 at the Lone Oak Chapel of Milner & Orr Funeral Home with Rev. Mike Nolen officiating. Burial will follow at Woodlawn Memorial Gardens.

In lieu of flowers, expressions of sympathy may take the form of contributions to, Bellview Baptist Church 4875 Old Mayfield Rd. Paducah, KY 42003.